Olympia, WA band Bacon Moon was originally formed in the waning hours of 2006 by Florida native Jon Moon and Alaskan David J Bacon.  Conceived initially as a two man writing project, they created a series of lo-fi and noise pop demos during 2007-2008, and made them available on the band’s MySpace page.  In early 2008, drummer Nick Lutes was added to allow for some public airing of the material around the Pacific Northwest.  There were a number of live performances through 2010, but due to outside commitments of the members, the group’s existence could best be termed as occasional.  A 2010 MySpace review pondered if “maybe the band members [weren’t] taking themselves seriously enough” and “that if they put their minds to it they could make a really good CD.”  The band has since made that record, an EP, tentatively titled No Rush, which is now available for digital download on the band's web site.

Links To Band Logos:  With White Rings or With Black Rings 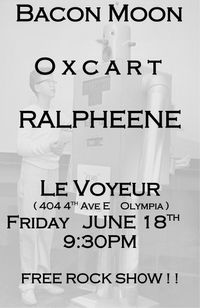 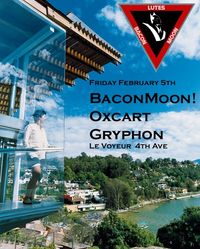